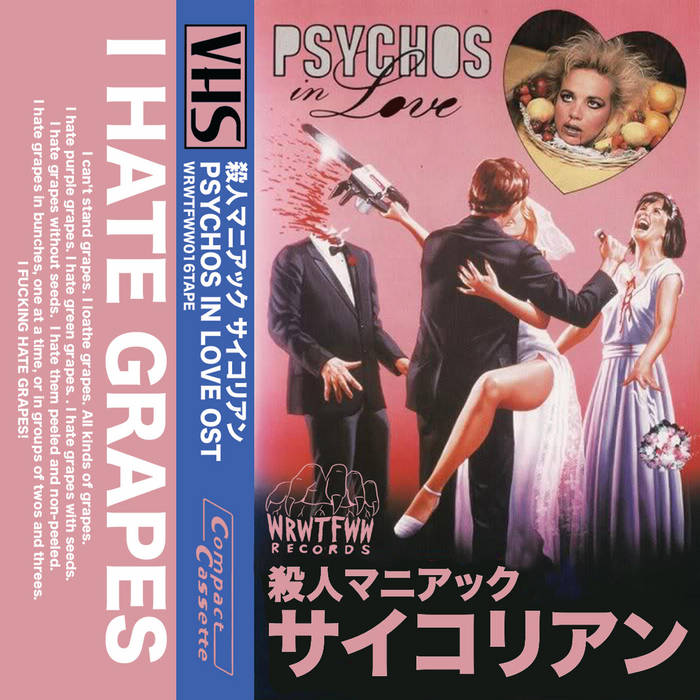 WRWTFWW Records is thrilled to announce the release of the long anticipated, always delayed, 30-years-in-the-making PSYCHOS IN LOVE Original Soundtrack available at last and for the first time ever in a super deluxe low fidelity purple-colored cassette!

Filled with sleazy funk, macabre synths, homemade electronic kitsch, anti-grape propaganda, and rewind-worthy dialogue excerpts, Psychos In Love is the ultimate lo-fi horror-romcom soundtrack adventure with a theme song so memorable you’ll find yourself humming it every morning. In Gorman Bechard’s words, "For the Psychos In Love theme I purposefully wrote what I hoped were the worst lyrics of all time, giving them to Carmine Capobianco with one note, ‘use them to write the worst song of all time.’"

The movie Psychos In Love (1987) is a trenchant, laugh-out-loud indictment of slasher films, romantic comedies, and grapes (that’s right, pal, grapes), a true genre-defying post-modern cult classic that will wind its way into your heart as its characters work their way through vats of gore. Packed tight with sly homages to – and parodies of – the work of such cinema legends as Alfred Hitchcock, Woody Allen, Roger Corman, Groucho Marx, and Gerard Damiano, Psychos In Love foreshadows the grand guignol culinary delights of Silence of the Lambs, served up with a healthy portion of wry wit and all-American t&a.